Be a good listener. Your ears will never get you in trouble. 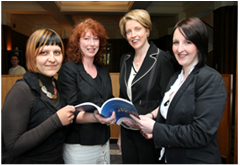 Tanaiste and Minister for Enterprise, Trade and Employment Mary Coughlan T.D. today (15th July 2008) launched the Global Entrepreneurship Monitor (GEM) Report for Ireland for 2007. The report found that 8.2% of the adult population living in Ireland is engaged in entrepreneurial activity, an increase on the 2006 level of 7.4%. The 2007 report also shows a significant increase in the number of women entrepreneurs, with women’s entrepreneurial activity rising to 5.9% in 2007 from 4.2% in 2006. This is significantly higher than both the EU and OECD averages (4.3% and 3.6% respectively) and represents of over 1,000 women on average starting new businesses in Ireland each month.

Welcoming the report the Tanaiste said:

“Entrepreneurship is central to Ireland’s future economic, regional and social development. The GEM report for 2007 demonstrates that Ireland remains to the fore in entrepreneurial activity in both Europe and the OECD. I am especially delighted to see a narrowing of the entrepreneurship gender gap, owing to a very significant increase in the number of women starting new businesses in Ireland”.

“The focus of government is to continue to create an enabling environment for innovative start-up businesses, thereby maximising the growth potential of all new enterprises and creating a vibrant enterprise base throughout all regions” the Tanaiste added.

“The profiles of entrepreneurs contained within the report highlight the diverse backgrounds of those setting up new businesses in Ireland and the wide variety of new enterprises being started. Their common trait is a passion about their new enterprise and a determination to see it succeed, recognising that there will be challenges along the way. I hope that their stories may be an inspiration to others to considering entrepreneurship as a real career option”.

Commenting on the report Brendan Flood, Head of Entrepreneurship and Regions at Enterprise Ireland said:

“In a tougher global market, it is imperative that Ireland continues to produce and sustain high-growth companies that are capable of achieving the scale necessary to compete internationally. Enterprise Ireland is committed to helping export-focused Irish companies to grow internationally by enhancing their leadership and innovative capabilities.”

“The rise in the level of informal investment is very welcome as this is an important source of capital to those starting a business – 3.3% in 2007 compared with 1.7% in 2006. This means that 91,000 individuals in Ireland invested in someone else’s business in the previous 3 years. The average amount required to start a business was €30,000.”

Helena Acheson went on to caution that the focus must remain not only on encouraging entrepreneurs to start but also to successfully grow their businesses. “This will be particularly important in the context of the current challenging economic climate,” concluded Acheson.

The GEM Report is sponsored by Enterprise Ireland, Forfas and the Gender Equality Division at the Department of Justice, Equality and Law Reform. The members of the GEM Irish research team are Paula Fitzsimons and Professor Colm O’Gorman.

“The Cork County Development Board is charged with the co-ordination of services at the county level. This involves the implementation of key inter-agency economic, social and cultural projects. In that regard, Alvina’s informative and interesting presentation to the multi-agency Board helped to significantly advance the process of integration in Cork County. Members found her focus on Cultural Diversity Awareness extremely useful and recognised the benefits of proceeding with the integration issue on a county-wide level. I have found Alvina’s approach to putting her message across to be engaging, positive, practical and good-humoured.”